Now you're thinking with Bootstrap - Part 2

This blog post uses Ruby on Rails as the web framework, but most of the points should apply to your framework of choice. It also focuses on Bootstrap, but it should also work with Foundation or any another front-end framework.

Today we’ll explore how we can start using Bootstrap in our application.

This is the 2nd part in a series of 3 posts about how to use Bootstrap:

The proper way of using Bootstrap

There’s actually two better ways of using Bootstrap in a Rails application. One makes use of Sass @import and the other uses the standard manifest = require. Let’s see what each of them brings to the table.

In both cases, we start by including the gem in our Gemfile:

We will also use a very simple theme file to showcase how each method behaves with our custom stylesheets:

Let’s start with the Sass way as it is the one recommended by the Bootstrap team:

We recommend against using //= require directives, since none of your other stylesheets will be able to access the Bootstrap mixins or variables.

Let’s try it their way.

First we need to import Bootstrap into application.css.scss (yes, you simply append .scss to the manifest file).

However, since we don’t need everything that Bootstrap has to offer and we care about sending as little data as possible, we’ll use a custom bootstrap file that allows us to pick and choose the components we need.

Fortunately, Bootstrap already provides such a file that looks like this:

So it’s only a matter of selecting the components we want and commenting out the others. To use this file, the Bootstrap README says to do the following:

So by combining this method and our custom theme file, we end up with the following manifest file:

This solution works relatively well, but there’s one big problem with it and it’s a problem only you, the developer, will notice. This method produces a single bloated stylesheet even in development (notice the h1 { color: red; } at the bottom of the file): 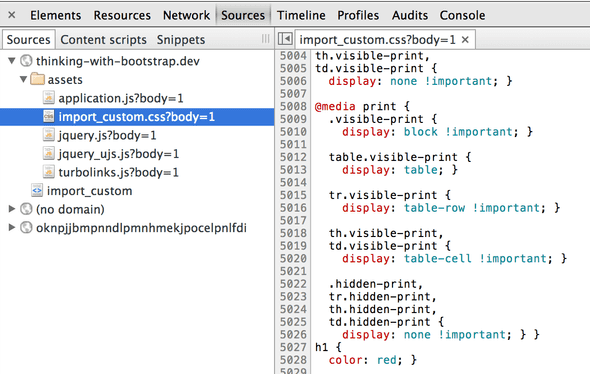 This makes debugging CSS issues much harder because it’s not always obvious which file contains an offending rule.

The second method is more in line with the way Rails wants manifest files to work.

We will use the same bootstrap-custom.scss and theme.scss files, but instead of importing them, we will require them. As mentionned in the Bootstrap README, this will prevent us from using the Bootstrap mixins and variables. However, there are ways around that and I will discuss them in a future part 3 of this article.

So let’s see how the manifest file looks like using this method:

Notice that there’s no place to override the bootstrap variables. What I like to do is create a bootstrap-variables-overrides.scss file and import it before the @import "variables"; line in bootstrap-custom.scss. It also has the nice benefit of grouping all your variables into its own file.

And with that, we get the resulting stylesheets: 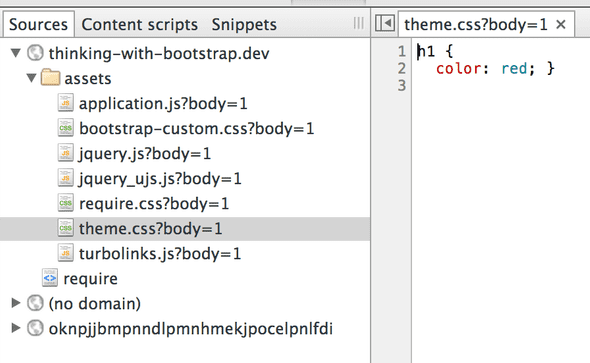 Ah, much better. Every file is still its own stylesheet and debugging is easy (or easier at least) again.

My recommendation: use = require

I strongly recommend using this method and as I will demonstrate in part 3, there are ways that you can use variables and mixins without collapsing everything into a single stylesheet.

I created a sample project with the two methods in use. Look for import.css.scss and require.css.

A web developer's musings on software, product management, and other vaguely related topics.